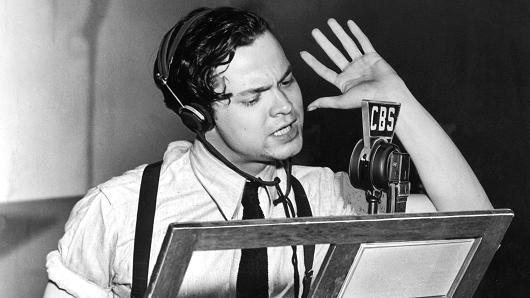 On the evening of October 30, 1938, the audience listening to CBS Radio were told they were going to listen to the music of Ramon Raquello and his orchestra, broadcast live from the Meridian Room at the Park Plaza in New York City. The performance began, but after a few minutes into it a reporter from Intercontinental Radio News interrupted to deliver an important announcement. Astronomers had just detected enormous blue flames shooting up from the surface of Mars.

The broadcast returned to the music of Ramon Raquello, but soon it was interrupted again with more news. Now a strange meteor had fallen to earth, impacting violently on a farm near Grovers Mill, New Jersey. A reporter was sent there to explain what was happening. It turned out that the meteor was not a meteor. It was, in fact, a spaceship, out of which a tentacled creature, probably a Martian, emerged and blasted the witnesses with a deadly heat-ray.

Believing that the nation had been invaded by Martians, many listeners panicked. One mother in New England packed her babies and lots of bread into a car, figuring that “if everything is burning, you can’t eat money, but you can eat bread.” Other people hid in cellars, hoping that the poisonous gas would blow over them. One college senior drove forty-five miles at breakneck speed in a valiant attempt to save his girlfriend. By the time the night was over, however, almost all these people had learned that the news broadcast was entirely fictitious. It was simply the weekly broadcast of Orson Welles and the Mercury Theatre. That week, in honor of Halloween, they had decided to stage a highly dramatized and updated version of H.G. Wells’ story, The War of the Worlds.  The broadcast reached a huge audience, demonstrating the enormous reach of radio at that time.

Approximately six million people heard it. Out of this number it was long thought that almost one million people panicked. More recent research, however, suggests that the number of people who panicked is probably far lower. In fact, some sceptics contend that the idea that the broadcast touched off a huge national scare is more incredible than the broadcast itself, which was never intended to fool anyone. (At four separate points during the broadcast, including the beginning, it was clearly stated that what people were hearing was a play.) The idea that hundreds of thousands of people panicked may have arisen because the media exaggerated the figures to dramatize the panic.